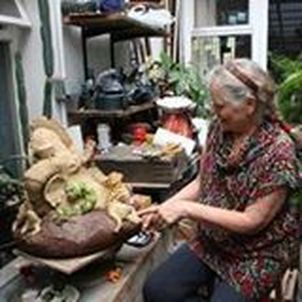 Jabawocky in the making
Millie Wood Swanepoel is African, grew up on an isolated farm in Zimbabwe, at a time when Africa was all that we imagine it to be. Since that time, the wildlife has diminished in numbers and Africa becomes more and more of a shell of what we envisage.  This is the heart of her work.

This is not a sad tale, rather one of appreciation for the wildlife that has withdrawn, of observation of the boundary between human and animal. The scope of both these themes has become wider and no longer entirely African.

Of animals, appreciation has often become a loving humour that pursues the individuality, the character, the essence of animals, who use body language rather than words.

Of human and animal, observation sometimes becomes an undercurrent of anger and despair, marking and binding the animals.  More often this boundary is explored in myth and legend both sculpturally and abstractly. Sometimes the pieces are almost witnessing the birth of primitive religion with not quite human forms beginning to emerge from animal forms.

Throughout all this, it is the link between human and animal that is important; this link is a symptom of ourselves. The more diminished this link, the blinder we are to ourselves.  Animals provide a context for our own interactions and behaviour.  They remain a part of our lives though often unseen and not thought of.

Technical notes: -
All the pieces are handbuilt and most are fired to Earthenware or stoneware. Sometimes paper pulp or fibreglass is mixed into slip and fired.

My approaches to my work: -
ABSTRACT and often mixed media with Found Objects eg. horns, teeth, bones, wood, bark, metal etc. The bag-like pieces are a statement about poaching or how humans are able to make pouches or containers from animal skins etc.

GARDEN AND INDOOR sculptures. Animals again and exploring the relationship between human and animal re: myths, legends or tales and fables. I am also interested in the pure form or shape of animals.

HUMOUR - trying to capture the essence, character or feeling of animals. Being aware of their body language.

RECYCLING OBJECTS – recycling and creating a piece from found object.  This is very much a part of my enjoyable childhood and it helps the planet.

All four approaches are equally important areas for me to explore AND for satisfying different sides of my character. Often these approaches have considerable overlap; sometimes a single piece will include elements from all three approaches.

I have worked in this fashion since 1984, and I enjoy the challenge of working with the multiple demands that these approaches offer.

I started my career as a fine art painter and sculptor before becoming interested in ceramics – maybe that is why I work in the way I do.

There is also a cyclic side to my work. An idea will surface to be explored as a theme in my sketchbooks. The theme will get worked through in the form of several pieces over a period of time. The theme then enters a dormant phase before beginning, again, to make its appearance in sketches and pieces. This approach works well for me as it help to keep the themes fresh.

Most Galleries I deal with understand this and give me fair warning of what they expect or require.

Millie's exhibitions include the V & A and the Museum of Mankind, London.


Millie received her Masters degree from the Royal College of Art.
She taught at Camberwell School of Arts, London.
​